From the Presenting Organization of the Washington, DC Performances: As a valued member of our Shen Yun family, your well-being is our highest priority. Since the Kennedy Center has canceled all public performances and events until Sunday, May 10, 2020 in order to reduce the spread of the CCP virus (COVID-19), the Shen Yun performances at the Kennedy Center from April 7-12 are cancelled as well.

The Beauty of
Divine Beings Dancing

The gong resounds, the curtain opens, and a heavenly scene is right before your eyes. Fairies emerge from a sea of billowing clouds. Mongolians ride on horseback across grasslands as vast as the sky. Classic stories of love and loss, of humor and heroic deeds, come to life. You will be amazed by how vibrant, exciting, and profound classical Chinese culture can be.

“An explosion of color and sound... Chinese culture in its fullest flower.”

Through breathtaking dance and music, Shen Yun’s artists tell of a time when divine beings walked upon the earth, leaving behind a culture that inspired generations. Ancient Chinese wisdom, infused with Buddhist and Taoist spirituality and values, gave birth to everything from medical innovations to opera, dance, architecture, and even martial arts. But after decades of communist rule, much of this divinely inspired culture has been destroyed or forgotten.

Each performance consists of about 20 pieces, quickly moving from one legend, region, or dynasty to the next. Themes range from the delicate elegance of Tang court ladies to the battlefield heroics of valiant generals, from the timeless philosophical works of Lao-Tzu to spectacular scenes of magical realms. Some pieces also touch upon the topic of today’s China, shedding light on the oppression many experience for their spiritual beliefs, such as Falun Dafa. These tales of courage are often what audience members find the most touching and uplifting.

Shen Yun’s works convey the extraordinary depth and breadth of genuine Chinese culture, and bring the magnificence of five thousand years of civilization back to life on stage.

Shen Yun tours to some 150 cities around the world each year. From Tokyo to Paris, Sydney to New York, Shen Yun’s live performances garner thunderous applause and accolades from full houses everywhere.

Some audience members fly from other countries or drive hundreds of miles to see it. Others watch the same performance five or six times. Why? There are simply no words to describe it—you have to see it with your own eyes to find out.

Join us for the experience of a lifetime.

“Life affirming and life-changing… It’s an experience that will stay with you long after the final curtain.”

One Million Audience Members Each Season

From the Presenting Organization of the Washington, DC Performances: 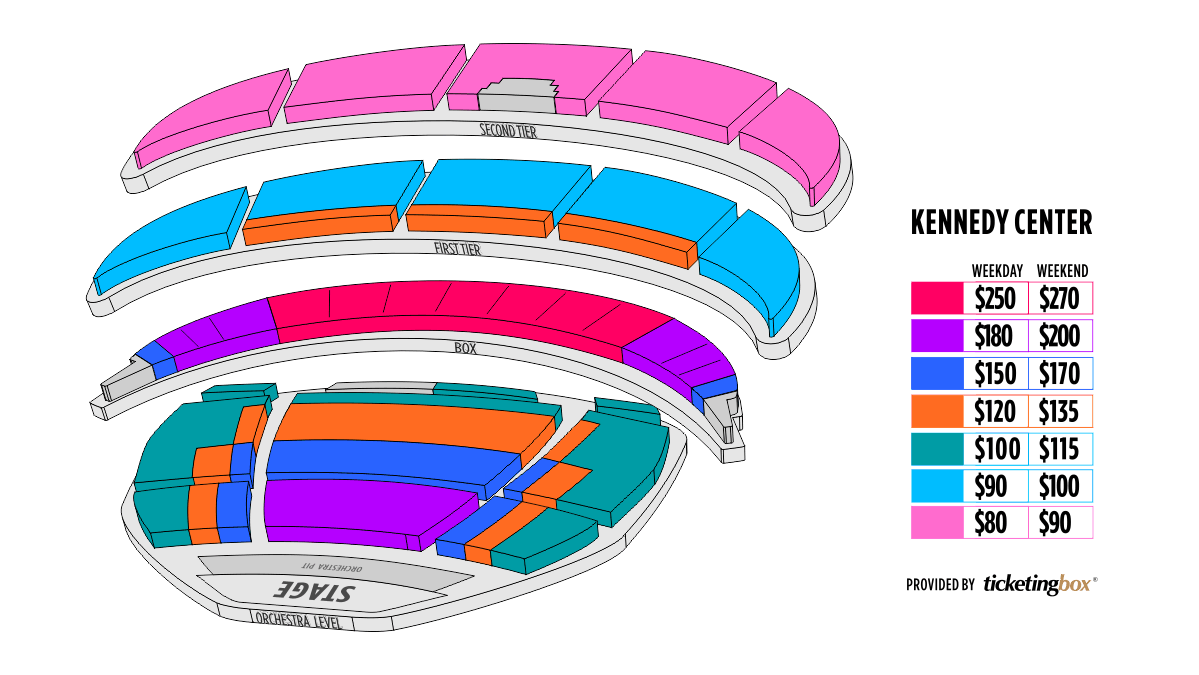 
Audience:
Children under 5 are not admitted.
Run Time:
2 hours and 15 minutes including intermission
Presenter:
Falun Dafa Association of Washington, D.C.
WARNING: Do not buy tickets from online scalpers or websites not linked to from this page. Those tickets are likely invalid or significantly marked up.

The John F. Kennedy Center for the Performing Arts (commonly referred to as the Kennedy Center) is a performing arts center located on the Potomac River, adjacent to the Watergate complex in Washington, D.C. The Center, which opened on September 8, 1971, produces and presents theater, dance, ballet, orchestral, chamber, jazz, popular, and folk music, in addition to multi-media performances for all ages.

The Kennedy Center Opera House has about 2,300 seats. Its interior features include much red velvet, as well as a distinctive red and gold silk curtain, which was a gift from Japan. The Opera House also features a Lobmeyr crystal chandelier, which was a gift from Austria.It is the major opera, ballet, and large-scale musical venue of the Center, and was closed for the 2003–2004 season for extensive renovations which provided a revised seating arrangement at the orchestra level plus re-designed entrances to this level.

The Kennedy Center has completed its parking garage expansion and site improvements project to better serve your needs. The garage's new features include a dedicated entrance from northbound Rock Creek Parkway to "C" Level north-end parking (open for most performances), direct access to the Potomac Expressway and the Roosevelt Bridge from the southern exits, and access to northbound and southbound lanes along Rock Creek Parkway from the northern exit.

For hotels near the Kennedy Center, please visit http://www.kennedy-center.org/pages/visitor/hotels

Following the lead taken by some media and other organizations, we are now also referring to the coronavirus as "the CCP virus," as it is the Chinese Communist Party's mismanagement and cover-up that has led to the global pandemic.