With its lovable character the Monkey King, Journey to the West is possibly the most popular novel of all time in the East. It endures over the centuries not just because of the escapades of its fun characters, but also because of its deeper theme involving a personal spiritual quest.

The novel, one of the Four Classics of Chinese literature, was written in the sixteenth century during the Ming Dynasty. It provides insight into Buddhism, Taoism, and traditional Chinese beliefs more broadly.

The story begins back in the seventh century, during the great Tang Dynasty. The emperor handpicks a young Buddhist monk to undertake a dangerous pilgrimage westward in search of true scriptures.

And, in fact, there really was such a historical monk. His name was Xuan Zang, and he made the dangerous trek in 627 C.E. It took him 17 years to complete it, which he did mostly on foot, from China across the mountains to what is today India—and back. The journey was a tremendous success: He brought back over 1,300 sacred scrolls and spent the rest of his life translating them—forever changing the face of Buddhism in China.

In the novel Journey to the West, the monk’s travels are filled with peril. Monsters that want to eat him hide behind every corner. He has to cross raging rivers and escape tricky demons that try to tempt him. To complete the quest, the monk will need the protection of three unlikely disciples: Pigsy, Sandy, and the most powerful of them all—the magical Monkey King.

Beyond mere entertainment, Journey to the West is also a metaphor for spiritual cultivation. The Monkey can be seen as representing the “monkey mind,” a mind of unruly thoughts that need to be reined in. Yet despite the disciples’ shortcomings, each is offered forgiveness and redemption. And the ordeals they face—from conquering fear to resisting temptation—represent the trials and tribulations one most overcome along a spiritual path.

More deeply, each of the main characters was originally in the heavens, living the life of a divine being surrounded by other deities. But because they misbehaved, they were banished to Earth. Their only chance of returning to their true home in the heavens is to cultivate their minds and purify their hearts on Earth.

In bringing these traditions forward, the story of the Monkey King inspires us to reflect on where we came from, and on our own journey home. 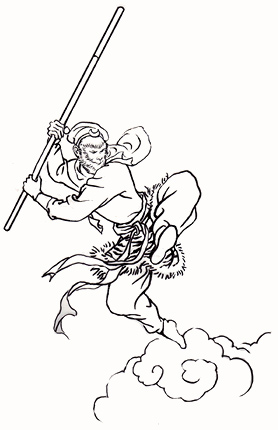 A mysterious rock is said to have absorbed the essence of Heaven and Earth for thousands of years until, one day, it gave birth to a very special monkey. He quickly rose to become king of all monkeys and, under the tutelage of a Taoist master, learned supernatural powers. Dressed in yellow hat and scarf, Monkey King has the ability to battle monsters with his long magical staff. He can also fly and can see through illusions. And he can even transform himself into anything he wants. What’s more, he can pull a hair from his head, blow on it, and turn it into more monkeys just like him. But Monkey is also mischievous—in one of his best-known shenanigans, he creates chaos in the Heavens and seems to be ruined. Yet the Goddess of Mercy appears and offers him a second chance: to serve as the monk’s first bodyguard.

The monk is the kindhearted leader of our heroes on their journey. Tang Monk is based on a real historical figure also known as Xuan Zang or Tripitaka. A humble but distinguished person, he wears a golden headdress gifted to him by the emperor. Because he is a particularly holy man who piously follows the Buddha’s teachings, demons believe that eating his flesh will grant them immortality. When faced with danger, he relies on his disciples for protection. If they act out of line, however, he can make them behave by chanting a special spell to tighten the metal bands on their heads, giving them a terrible headache. 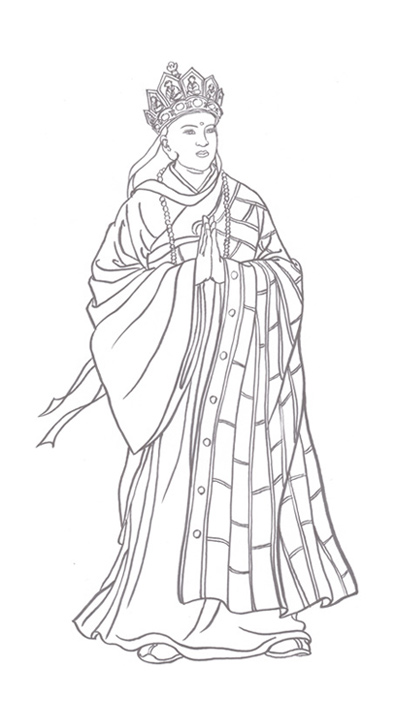 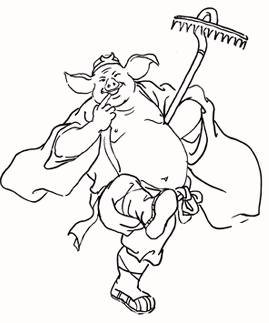 Pigsy once lived in the Heavens, where he was a high-ranking navy commander in charge of 80,000 celestial warriors. However, he had a fatal attraction to Chang’e, the beautiful Goddess of the Moon, and was exiled to Earth for his inappropriate behavior. He was reborn as a pig-man creature and has become portly, greedy, lazy, and—as before—lusty. But he can still fight his share of demons with his trusty nine-toothed rake. When there’s work to be done, Pigsy’s the last to get moving, and when trouble’s in the air, he’s the first to flee. Still, when push comes to shove, Pigsy’s loyalty shines.

Like Pigsy, Sandy had once been an immortal general in the Heavens. Yet one day, he accidentally shattered a precious vase and was banished to Earth. Sandy was cursed to live as an angry, bearded ogre that shapeshifts into a giant fish and finds meager sustenance by munching on people. His fate was finally reversed when he vowed to the Goddess of Mercy to mend his ways, and she arranged for the monk to adopt Sandy as a disciple. His weapon is a double-ended spear with crescent blade on one end. He is a dependable disciple who faithfully carries the group’s belongings over the long journey. 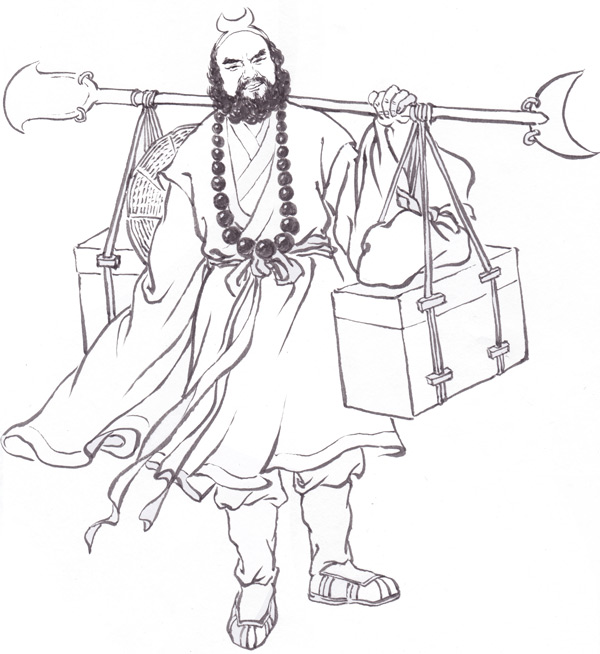